Last Saturday we were having dinner with a friend and he invited us to go hiking with him the next day. I immediately said yes as he always chooses some really nice routes. Then he said he’ll pick us up at 7am!!! I nearly spat out my drink as I’m a night owl, and that means I have to get up at 6.15am 😥

Next morning, the drive to Jiali Mountain at Miaoli took us over 2 hours, so luckily I could get some sleep on the way. At 2220m tall, Jiali mountain is the tallest in Miaoli county and is famous for its Japanese Cedar forest and roots path.
我們要去的是苗栗縣的加里山，車程大概兩小時，正好讓我可以在車上小睡片刻。加里山是苗栗第一高峰，有2220米高，以巍然聳立的杉林和樹根步道著名。

The hike up to the mountain is only 3.2km, but takes about 6.5 hours hours return. Here’s the entrance to the hike. 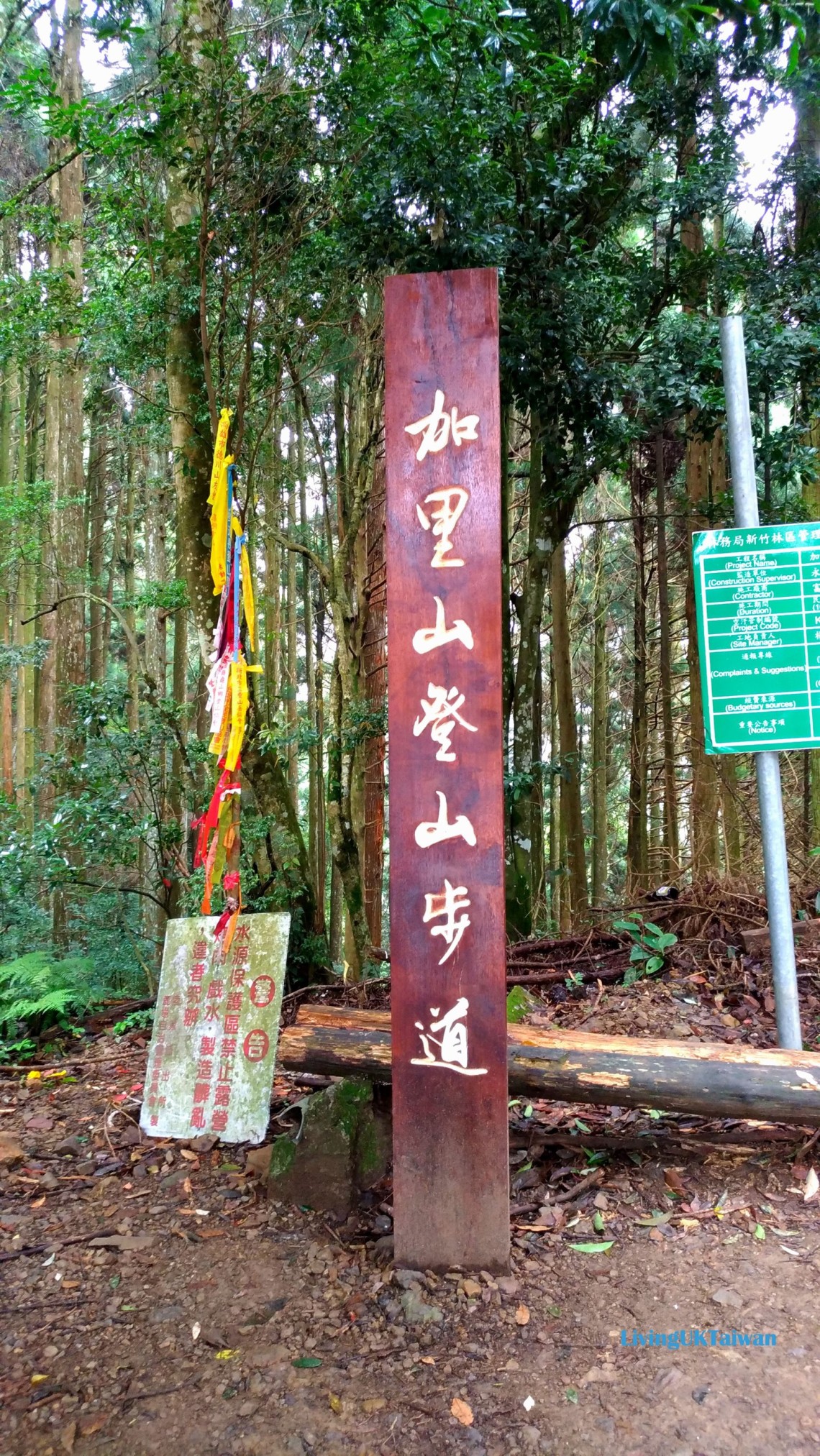 About 0.5km into the hike, we came across this lovely stream, the water was very clear and you could see the pebbles at the bottom of the pool from quite far way. There was a narrow bamboo bridge just enough for one person to pass, we had to go cross this first before we start to start zig zag up the mountain. 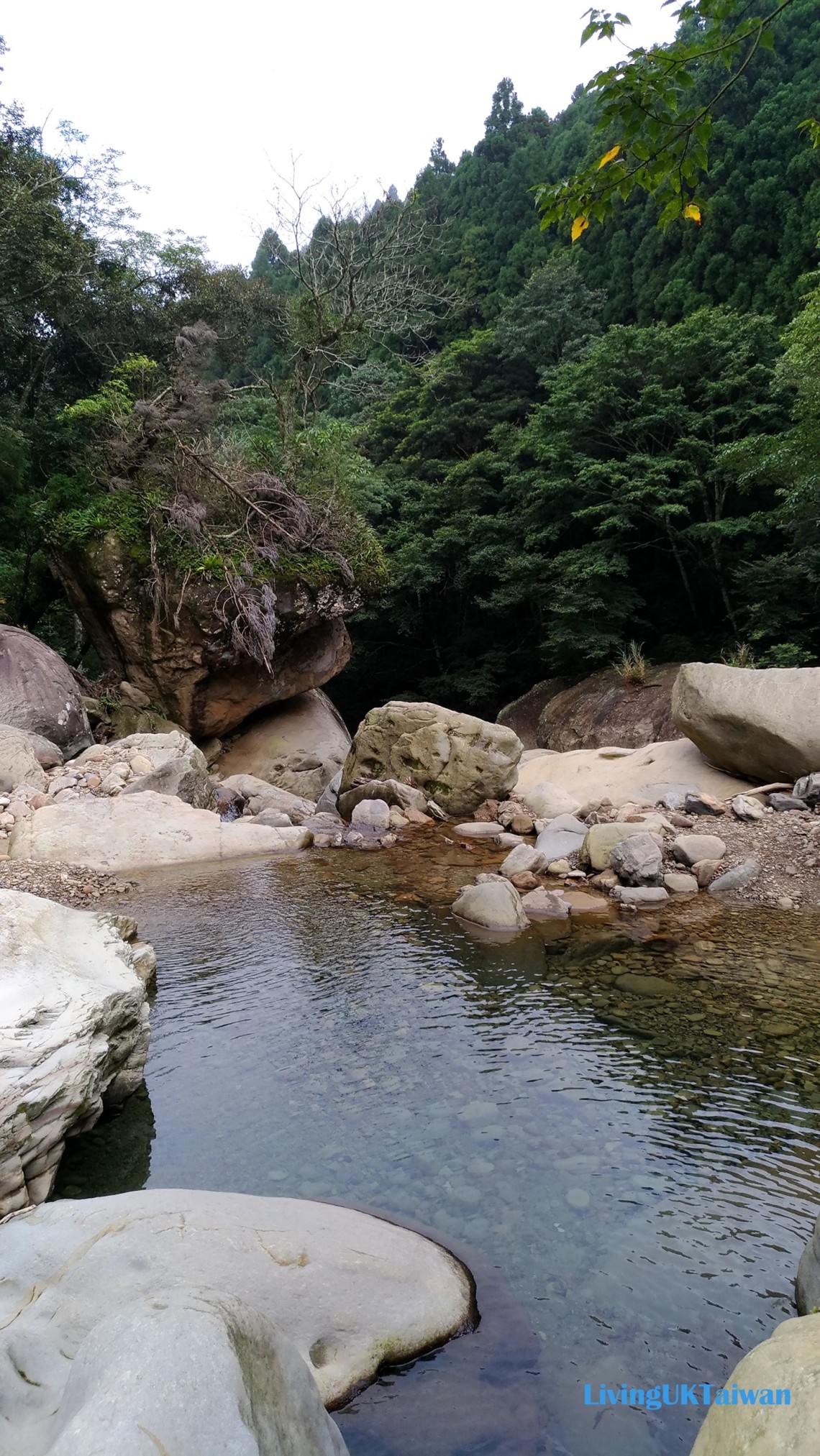 This first part of the route is relatively easy. Most of the hike goes through these amazing Japanese cedar forest. Needless to say, photo stops took up quite a bit of time. 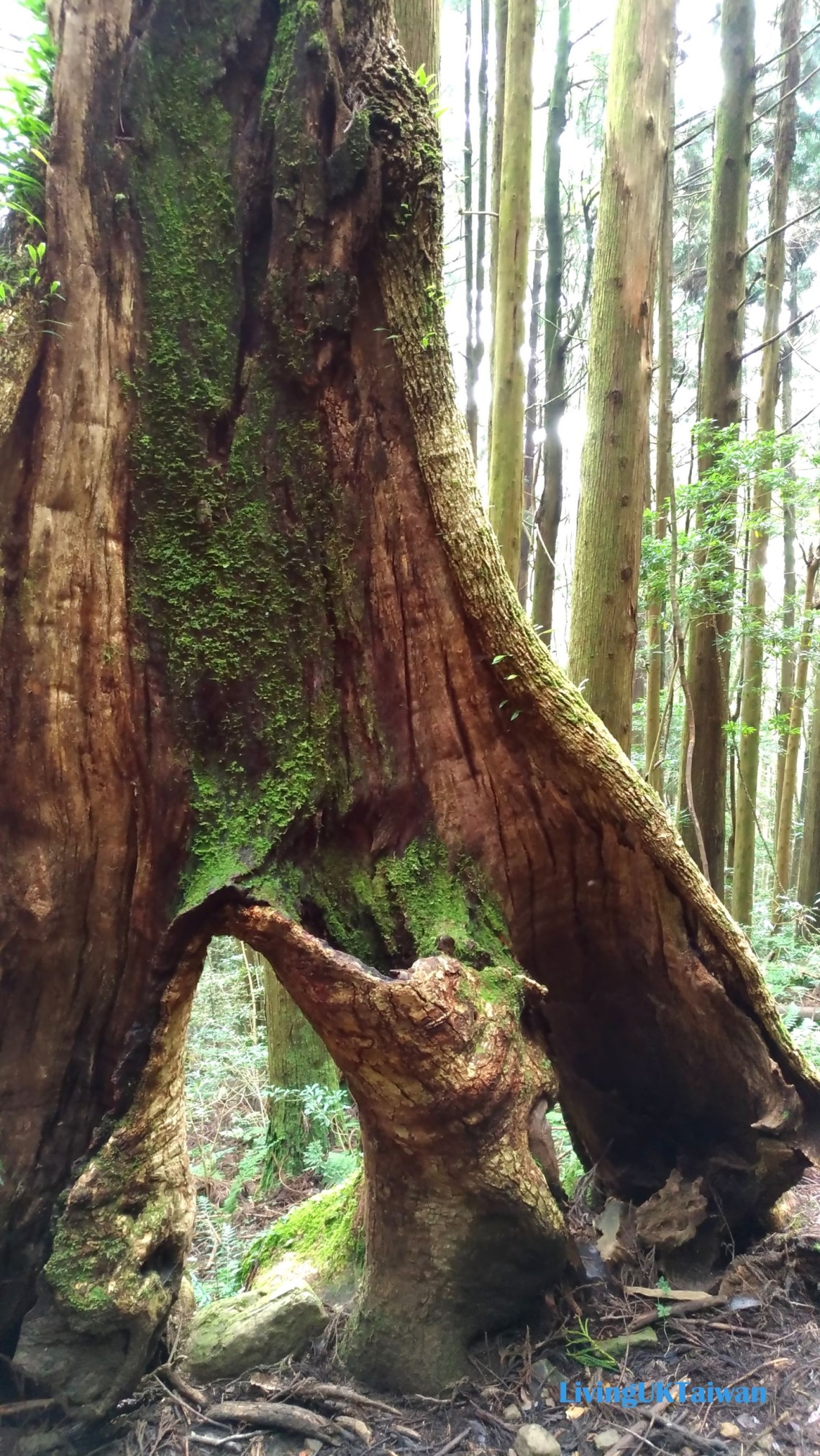 Another distinctive feature of this hike are the roots on the path. Save for some steps and a few bridges, we were walking on the tree roots all the time. Since we were in the forest and it was quite foggy, there was quite a lot of moist making it very slippery and more difficult for us.

There were some wild mushrooms here and there along the route, and my favourite one was this bunch which looks like coral. 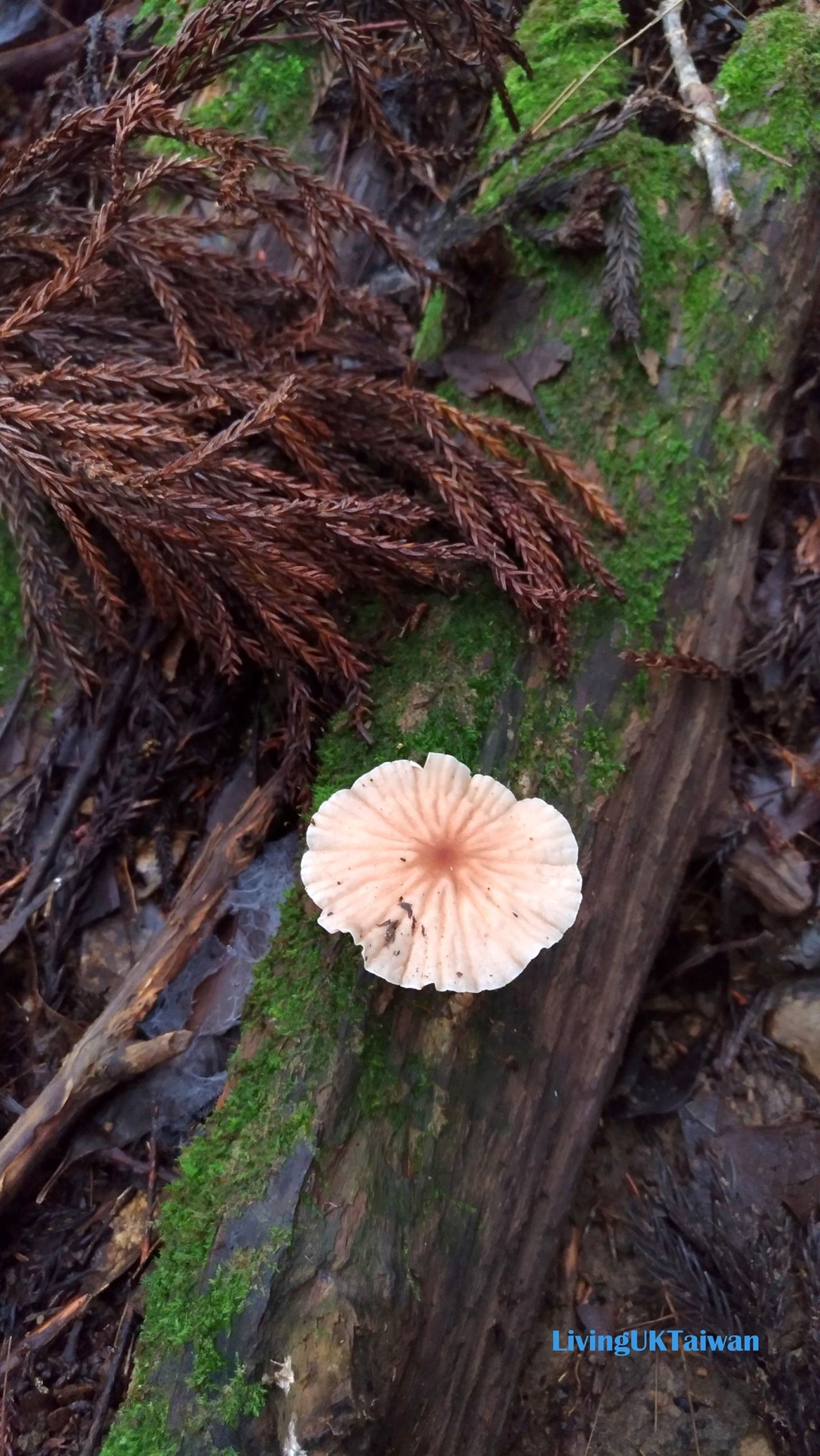 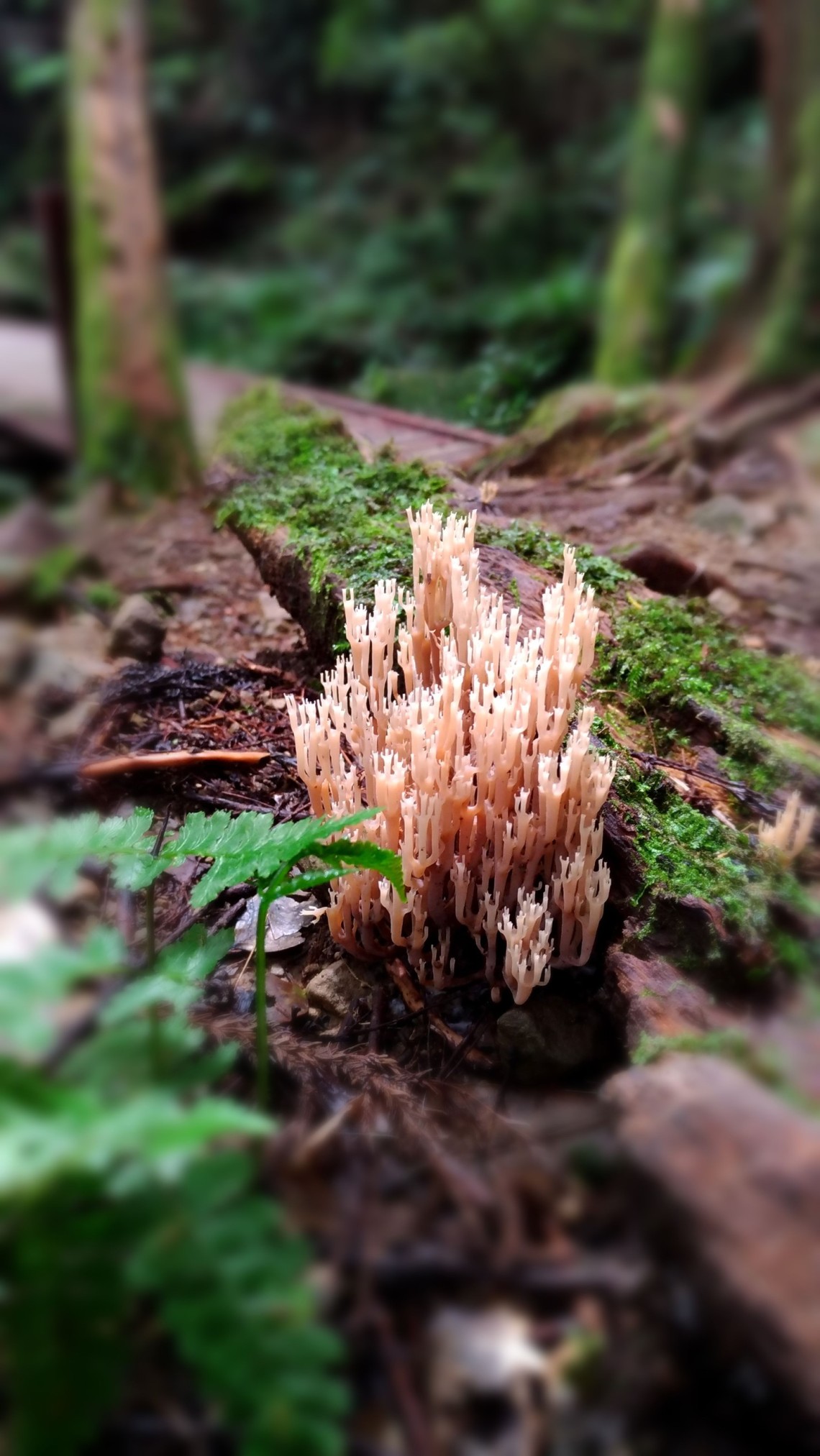 During the Japanese occupied period, this forest used to produce a lot of timber, so the trees in this part of the forest are all part of a reforestation programme that’s why they are all so neat and uniform. Remnants of those days can be seen from parts of the old narrow railway track used transport the timber.
在日本統治時代，加里山是木材產區。在登山途中還看到一些當年的遺跡，就是以前運木的火車路軌。所以現在我們看到整整齊齊的杉樹，都是木場關閉後居民再種植的。

Along the route, there were many big boulders in the middle of the forest. It looks like it’s been there for a very long time. Do you think this one looks like a dinosaur? 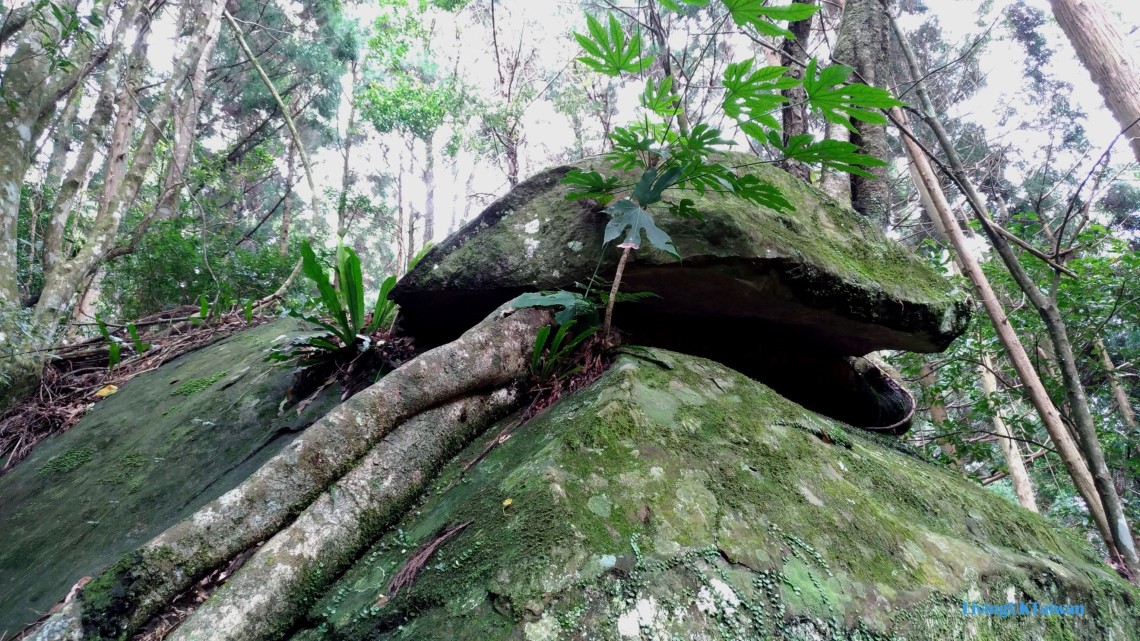 By 12.30 noon we had hiked for 3 hours and covered 2.65km, still 550m to go. We decided to stop for a rest here and have our light lunch before we try to conquer the most challenging part.

After lunch, we started the ascend up the mountain. This is where the challenge starts and takes about 45 minutes or half an hour if you’re tough. The path has disappeared and now we’re trekking along quite difficult terrain like these gaps along the boulders, rock climbing, and ascending up the mountain with the aid of the roots and ropes.

I’ve always wanted to go and try one of those indoor rock climbing centres, but never thought that my first attempt would be in natural outdoors environment. Each section was around 3 to 5 metres and sometimes I found it a bit difficult when I couldn’t find a strong enough root to step on. Here’s my other half and he’s a lot taller than me. 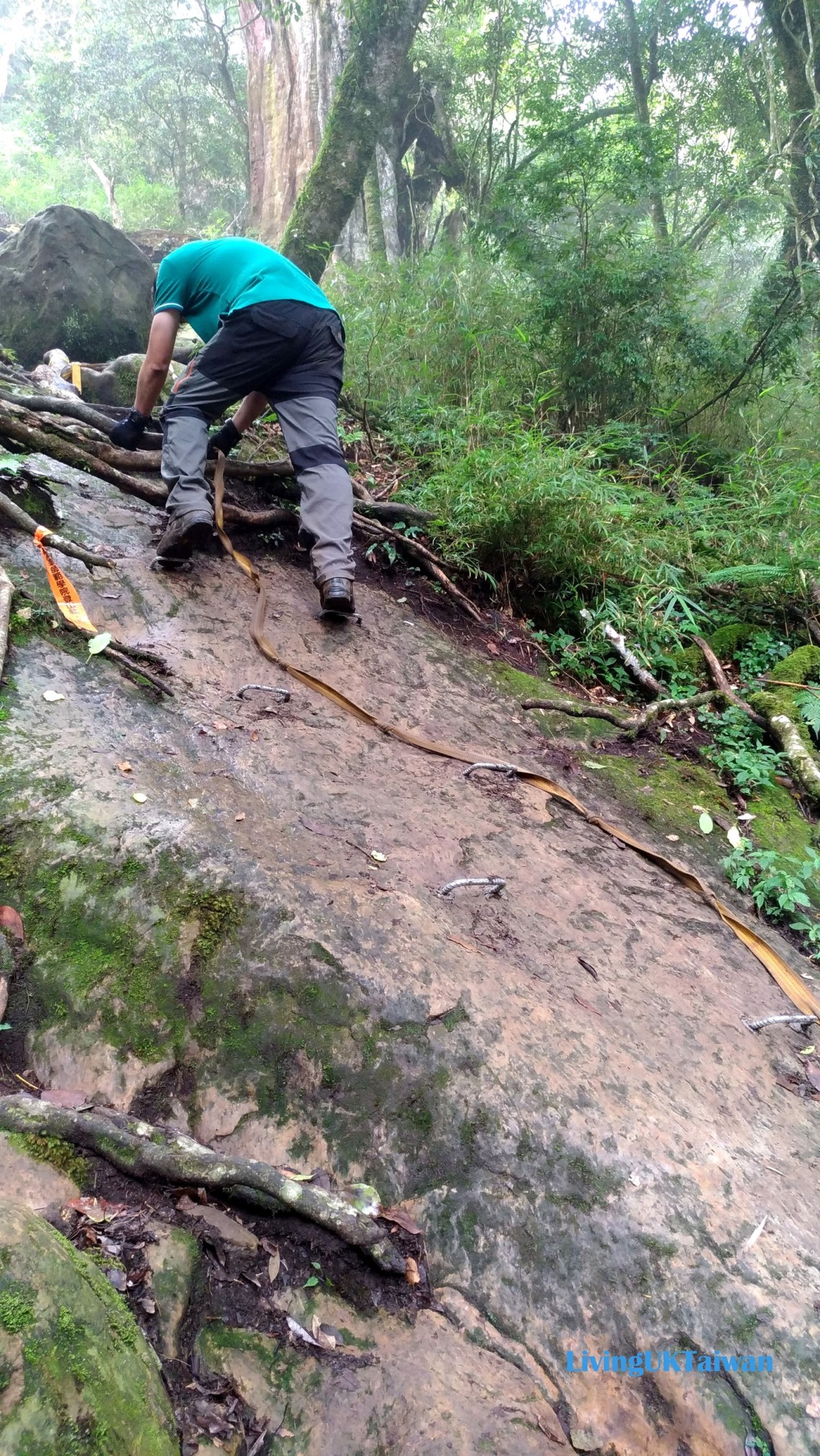 Around 40 minutes later at around 1.30pm we had climbed maybe 200m and I figured we weren’t going to make to up to the top of the mountain and all the way back down before dark. So we stopped here while our friend went ahead on his own. Apparently on a good day, you can get a magnificent view at the top of the mountain, but as you can see here, we’re amongst the fog already so that was another reason why I figured it wasn’t worth the extra effort. 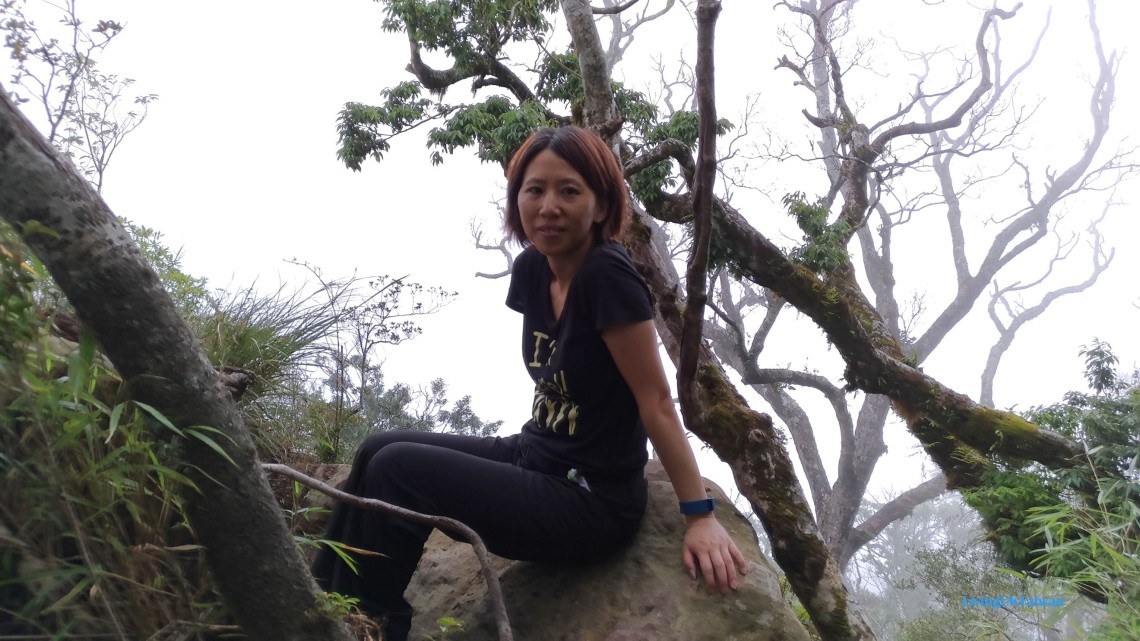 We waited for my friend at the lunch stop from earlier on, and by the time he returned it was already 3.30pm, and he’s a good strong hiker! I think if I did the ascend with him, I might have to end up camping overnight at the top of the mountain. By this time, we were amongst one of the last groups around and the thick fog was starting to set in. The descend down the mountain in theory should take less time, but due to the slippery roots we had to be very careful. Climbing down the ropes sections was easier than going up as I could just let myself drop pretty much the entire body height each time. 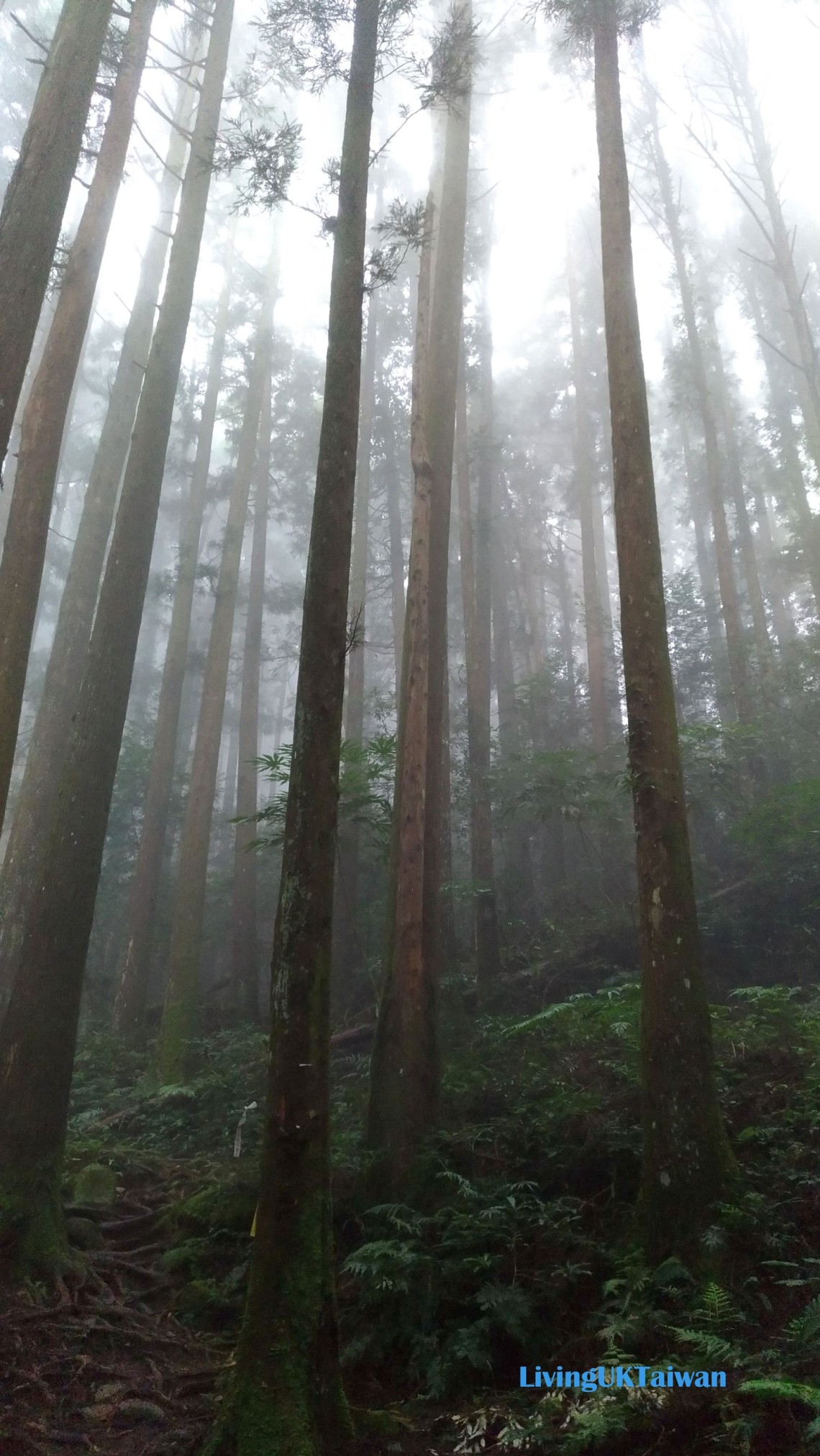 When we finished our hike, it was already dark, and we had to use our mobile phones to guide ourselves out of the forest for the last hundred meters (note to self: bring a torch next time). Having said that, I’ve never hiked in the dark before, so overall, the enchanting forest and the rock climbing definitely made this a memorable hike.